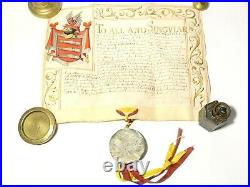 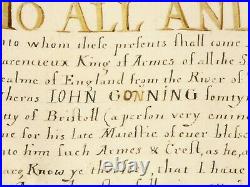 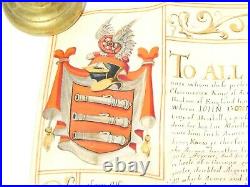 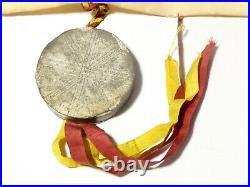 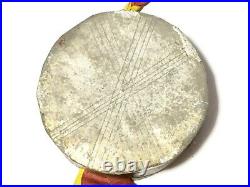 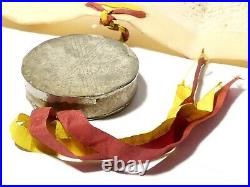 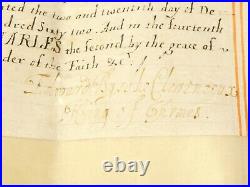 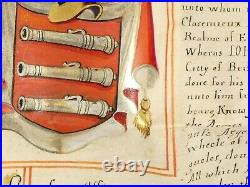 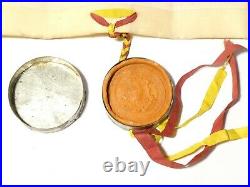 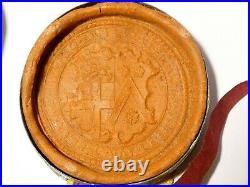 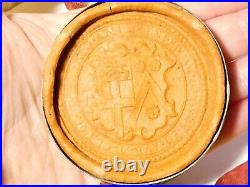 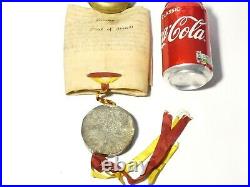 Please note: I have added 18 pictures to the end of this listing to try and show the item in as much detail as possible so please take the time to view them all carefully. This is one of a number of items that came from Frederick George North and his wife Mary Violet (nee Pawson) Countess of Guilford, The 8th Earl of Guilford's estate at Waldershare Park in Kent. With more items from passed down through the centuries from previous Earls and their wives including Frederick North, The Right Honourable The 2nd Earl of Guilford....

He was also 8th Baron North. The Tea Act of 1773 led to the Boston Tea Party which led to the American Revolution in 1776 which he had a lot to do with.

Then relation Francis North the 4th Earl of Guilford 1761 - 1817 and Frederick North 5th Earl of Guilford 1766 - 1827. If you google the family they are really well connected. Items belonging to the 8th Earl Lt Col Frederick George North who was in the Royal East Kent Yeomanry... With a few items from this period. North & Guilford family livery crest on the silver items as well as other antiques and collectables I will be listing over the next few weeks.

Some very exciting and important 17th Century engravings and Grand Tour watercolours. Well this is a very nice original 17th Century small vellum illuminated document. It is a Grant of Arms dated 1662 from the reign of Charles II which is to John Gonning of Bristol.

It is signed by Sir Edward Bysshe, Knight, Clarenceux, King of Arms of the South, East and West parts of the Realm of England, from the river Trent southward. To JOHN GONNING Mayor now Alderman of the city of Bristol, his arms & crest. Affixed is the seal of my office. At the bottom hung on the usual turned over bottom edge of the vellum hand written document is a red and yellow fine silk ribbon which has the tin seal box attached.

The seal box has a slight design on both sides. Inside is the official wax seal of Sir Edward Bysshe, this is one sided only... The back of it has the yellow and red silk ribbon attached to it. Be assured all of this item is period to 1662, non of it is restored. The Arms & Crest are hand painted - illuminated in the top left corner.

The document has been folded so does have folds and turned over edges and corners. The red and yellow silk fine ribbon is complete with the tin attached as it should be. The seal is complete but I can hear rattling inside somewhere. The document is 13 and 1/2 inch x 10 and 3/4 inch and the seal tin is 2 and 1/2 inch dia.

On the outside of the vellum when it is folded back up says. The actual hand written document shows a mistake on the surname Gonning, the on of g ON ning has been altered on both of the capital surnames. A very interesting 17th Century document which of course is the ONLY example of it. This is not a copy and there are no more of these in any museums or archives. You can google all the named people on it as well which makes very interesting reading about Charles II - Sir Edward Bysshe Garter King of Arms in the Commonwealth period - John Gonning.

If you google John Gonning you will find a very interesting Heraldic online blog which actually talks about this actual document and they refer to the entry into the original Grantees of Arms which has the surname spelt GOUNING. You do not see these for sale that often that have their original complete wax seal still attached by original silk ribbons in the correct tin. A great go-with original document if you collect hammered or milled silver or gold coins of King Charles II era which remember says on this document he was King of England, Scotland, France and Ireland. A nice cabinet of the first issue gold Unite's, Double Crown's, Crown's as well as all the silver coinage he did with this at the back in a nice frame would set your collection off just grand. Scale is usually an English 1 penny coin which is 20mm in diameter which is just short of 7/8ths of an inch in diameter. In the title or description it means. Condition which may have scuffs, scratches and damage. We cannot and will not declare items below the sale value.

The item "1662 Charles II Grand of Arms Illuminated Document & Seal JOHN GONNING Bristol" is in sale since Friday, March 26, 2021. This item is in the category "Antiques\Manuscripts".

The seller is "diggerlee" and is located in Yorkshire. This item can be shipped worldwide.