1662 First Edition Of Descartes' Treatise On Man And His Body 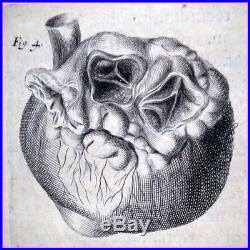 4to (205 x 160), contemporary mottled calf binding, gilt floral decoration and title at leather five raised bands spine , pp. And engraved text-illustrations (many of which are full-page) and 10 full-page engraved plates, one of which is the heart-plate with moveable parts, the Cardiac-flaps. A very good copy with good margins. Descartes' treatise on man, usually regarded as the. First European book on physiology.

In contemporary binding and with a distinguished provenance. This important opera was published in a Latin translation by Florentius Schuyl from a defective copy of the original French MS of Lhomme ; the original was not published until two years later in 1664. Is known as the first text-book of physiology, and the first purely mechanistic account of bodily functions. Descartes was one of the first to embrace Harveys doctrine of the circulation and the book opens with. An account of the cardiovascular system. Illustrated by a plate of the heart with movable flaps. Mechanistic survey of general physiology. Which he treats in great detail. (drawing on Kepler for the optical part) and the. The impact of the Cartesian physiological program, once it was publicly known, was enormous.

In two ways philosophically and physiologically Descartes transformed long-standing beliefs about animals and men. Philosophically, of course, his notions of mind-body dualism and animal automatism had extremely important implications that were not lost on Henry More, Malebranche, Spinoza, and Leibniz, along with many others in the seventeenth century... But physiologically, too, Descartes conceptions had an impact that in many ways was even more impressive than the philosophical influence, because it affected the actual course of contemporary science. Brown in Dictionary od Scientific Biographies. Descartes considered the human body a material machine, directed by a rational soul located in the pineal body.

This book was the first attempt to cover the whole field of "animal physiology"' (Garrison-Morton). Without Descartes, the seventeenth-century mechanization of physiological conceptions would have been inconceivable' (Dictionary of Scientific Biographies). The remarkable engravings and woodcuts were commissioned by Schuyl, Descartes having left only one or two sketches. The errata on the last page, headed Nota mostly relate to the illustrations, and include a woodcut to replace Fig. 61 (the image is reversed and the lettering altered).

Il De Homine was initially meant to be part of the Discours sur la méthode (1637) but after Galileo condemnation in 1633, Cartesio feared that his mechanicistic vision could be considered heretic and postponed its printing. When Clerselier edited the text for the French edition two years later (see next item) he rejected the 1662 edition illustrations and commissioned new ones. (1596 1650) was a French philosopher, mathematician and writer who spent most of his life in the Dutch Republic.

He has been considered the father of modern philosophy, and his influence in mathematics is equally apparent; the Cartesian coordinate system allowing reference to a point in space as a set of numbers, and allowing algebraic equations to be expressed as geometric shapes in a two-dimensional coordinate system (and conversely, shapes to be described as equations) was named after him. He is credited as the father of analytical geometry, the bridge between algebra and geometry, crucial to the discovery of infinitesimal calculus and analysis. Descartes was also one of the key figures in the scientific revolution and has been described as an example of genius. He refused to accept the authority of previous philosophers, and refused to trust his own senses. Descartes frequently sets his views apart from those of his predecessors.

In the opening section of the Passions of the Soul, a treatise on the early modern version of what are now commonly called emotions, Descartes goes so far as to assert that he will write on this topic "as if no one had written on these matters before". Descartes laid the foundation for 17th-century continental rationalism, later advocated by Baruch Spinoza and Gottfried Leibniz, and opposed by the empiricist school of thought consisting of Hobbes, Locke, Berkeley, and Hume.

Leibniz, Spinoza and Descartes were all well versed in mathematics as well as philosophy, and Descartes and Leibniz contributed greatly to science as well. Descartes considers the human body as a machine led by a rational sould, located in the Pineal gland, controlling the movements: for example intentions are transformed into actions and worlds, while other simple actions breathing, deglutition, pupils contractions, are caused by the course of the spirits, that, are situated as light winds, into ne nerves. Robert Honeyman IV at front inside board. Honeyman IV was a famous Science collector in Juan Capistrano, California.

Honeymans library evolved from an interest in early mathematics, and included almost every edition of Euclid, several mathematical incunabula, medicin and science books and some superb medieval scientific manuscripts. Honeyman had begun collecting as early as the 1920s. For a time he was a major benefactor of the library at Lehigh University, to which he contributed some remarkable books, including the original hand-corrected galley-proofs of Darwins On the Origin of Species (1859). Few pages lightly browned, but a very good copy with wide margins, contemporary binding and an important provenance. According to Bibliography the book have also been printed in a second state, with the publishers names reversed in the imprint and with a different device.

196-97; Krivatsy 3120; Tchemerzine II, 798; Wellcome II, p. The item "1662 FIRST EDITION OF DESCARTES' TREATISE ON MAN AND HIS BODY" is in sale since Wednesday, September 07, 2016. This item is in the category "Books\Antiquarian & Collectible". The seller is "bibliomany" and is located in Milano. This item can be shipped worldwide.