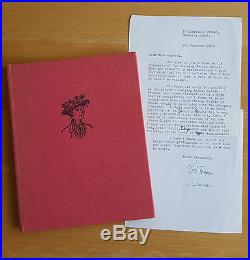 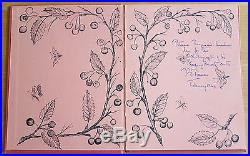 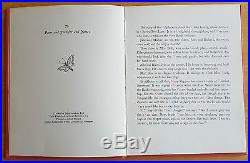 L Travers dated 5th February 1965. Thanking her for the snapshots of the Sleeping Beauty Castle. Of course it could not possibly be the original Sleeping Beaty Castle because that comes straight out of a myth that is prehistoric, but I think it is no wonder that this lonely strange bubble of towers should be associated with the sleeping princess. I shall mention it in my book.

The story of the Sleeping Beauty is, to me a very fundamental fairy tale , but, alas I work on it very slowly because of all the chores I have in connection with the film (referring to the 1964 Walt Disney film of Mary Poppins). The letter is typed on 2 small old fashioned pieces of Basildon Bond 145 by 137mm. The letter is tucked inside a 1963 First Edition of the A to Z of Mary Poppins , signed by Travers to the end papers. Patricia Raymond, thanking her for the photographs of the Sleeping Beauty Castle.

P L Travers February 1964. Both are in very good condition: the book is clean and unscuffed, the letter has been kept inside.

The item "1965 PL Travers Autograph Letter and 1963 Signed First Edition A-Z Poppins" is in sale since Thursday, May 05, 2016. This item is in the category "Collectables\Autographs\Original (Certified)\Other Original (Certified)". The seller is "gardencity2793" and is located in welwyn garden city, Hertfordshire. This item can be shipped to United Kingdom.