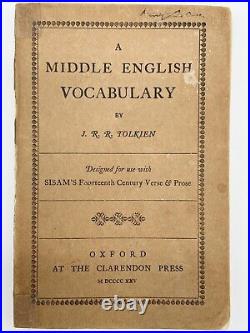 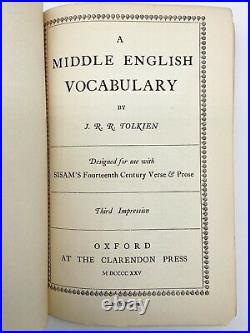 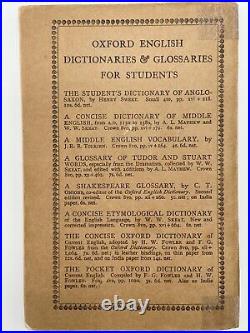 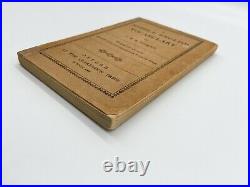 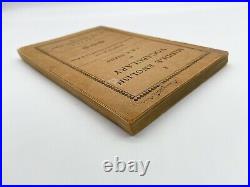 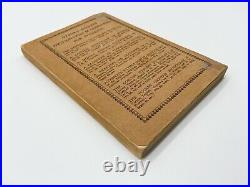 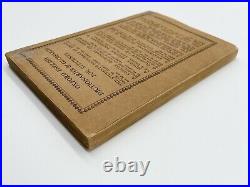 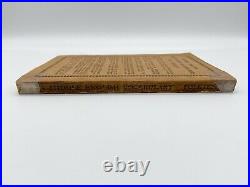 Most examples issued with the sheets of both bound together after printing, so few copies of A Middle English Vocabulary in this form exist. The glossary, Tolkiens first professional publication, is a vocabulary that was used as a supplement to Fourteenth Century Verse and Prose by Sisam, a groundbreaker in its day. As originally published in 1921 (Oxford, at the Clarendon Press), the 300-page "Fourteenth Century Verse and Prose" had an excellent introduction, interesting texts with informative headnotes, detailed technical endnotes, and an appendix on The English Language in the Fourteenth Century. However, it lacked a glossary.

This appeared separately the following year, as "A Middle English Vocabulary, " about 170 double-column pages (no numbering), compiled by one of Sisam's colleagues, none other than the young J. Tolkien's contribution is a model of rigor, precision, and compression, and will probably be enjoyed by those intrigued by his created languages, and used with respect, if not affection, by others. It was custom at the time to keep sheets until there was demand for binding. Tolkien is best known for his fantasy fiction. He began writing The Hobbit on the blank pages at the end of his students' exams, and it was read to his children as bedtime stories.

Tolkien died before finishing the Silmarillion, the great history of his imaginary universe. The work was under constant revision (and expansion) through most of his life. His son, Christopher Tolkien, was able to complete it and publish a set of'histories' of Middle Earth using his father's notes and unfinished manuscripts.

These now contain eleven volumes of material from J. Tolkien's notes on the languages, legends, and people of his fictitious universe.

In addition to being one of the preeminent fantasy writers of our century, Tolkien was a scholar of the Anglo-Saxon and Norse languages. He was a translator, critic, and philologist classical linguist.

He worked as a translator of the Jerusalem Bible and wrote definitions and researched word origins for the Oxford English Dictionary. His works of translation and criticism include Sir Gawain and the Green Knight and Beowulf and the Critics.

Binding tight with slight slant. Moderate wear to front hinge. Partial loss at head and foot of spine with exterior tape repairs, and vertical creasing to same. Front and rear cover mostly clean with a few blemishes and prior owner's name written on top right of front. Small loss of front cover corner.

Internally clean and exceptionally bright. The item "A Middle English Vocabulary 1ST EDITION TOLKIEN 1922 Hobbit Lord of the Rings" is in sale since Sunday, June 27, 2021. This item is in the category "Books & Magazines\Antiquarian & Collectible". The seller is "labb1279" and is located in Baton Rouge, Louisiana.