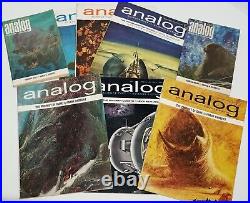 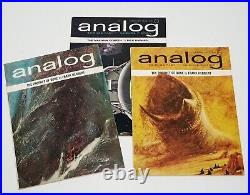 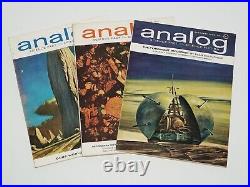 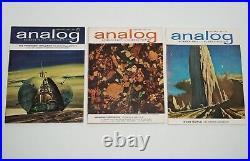 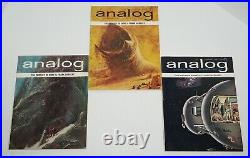 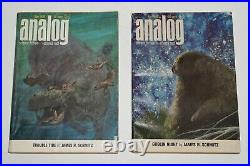 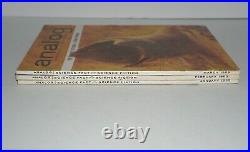 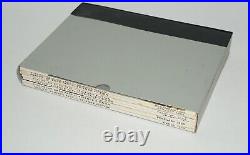 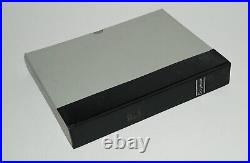 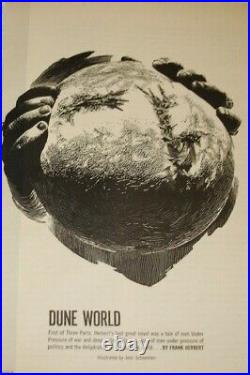 Includes December 1963, January and February 1964, which contain "Dune World" in three parts and January through May 1965, which contain "Prophet of Dune" in five parts. First Appearance in Print of Dune (Serialized in 8 Issues of Analog Magazine) BEFORE Dune was released in hardcover format. American author Frank Herbert, originally published Dune as two separate serials in Analog magazine which was released over 8 issues, "Dune World" in three parts and "Prophet of Dune" January through May 1965, in five parts.

The cover artwork from the January 1965 issue became the cover art for the dust jacket used in the hardcover first printing, while the March 1965 Analog cover has a spectacular depiction of a sandworm. Five of which are 11.25? And two of which are 5.5? All in near fine condition with very minor nicks or rubbing. Accompanied by an original Analog case to fit the larger format part of the set (please see images).

Dune was the first novel to win both the HUGO and NEBULA awards. This item is in the category "Books & Magazines\Antiquarian & Collectible". The seller is "iwc_2004" and is located in this country: US. This item can be shipped worldwide.