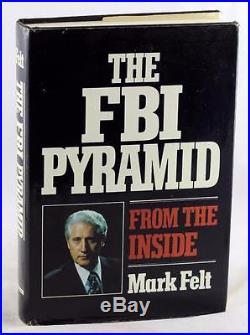 Signed and inscribed by Mark Felt (Deep Throat) on the FFEP. DJ in VG shape with light shelf-wear present to the DJ.

Boards in VG shape with light shelf-wear present. Text is clean and free of marks. (August 17, 1913 December 18, 2008) was an agent of the Federal Bureau of Investigation (FBI), who retired as the Bureau's Associate Director in 1973.

After lying about his involvement with reporters Bob Woodward and Carl Bernstein for 30 years, Felt admitted to being the Watergate scandal's whistleblower, "Deep Throat, " on May 31, 2005. Felt worked in several FBI field offices prior to his promotion to the Bureau's headquarters in Washington, D. During the early investigation of the Watergate scandal (19721974), and shortly after the death of longtime FBI Director J. Edgar Hoover on May 2, 1972, Felt was the Bureau's Associate Director, the second-ranking post in the FBI. While being the Associate Director, Felt provided the Washington Post with critical information that eventually led to the resignation of President Richard M.

In 1980, Felt was convicted of the felony of violating the civil rights of people thought to be associated with members of the Weather Underground Organization, by ordering FBI agents to search their homes as part of an attempt to prevent bombings. He was ordered to pay a fine, but was pardoned by President Ronald Reagan during his appeal. In 2006, he published an update of his 1979 autobiography, The FBI Pyramid. His last book, written with John O'Connor, is titled A G-Man's Life. On June 14, 2012, the FBI released Felt's personnel file at the agency, covering the period from 1941 to 1978.

It also released files pertaining to an extortion threat made against Felt in 1956. ALL ITEMS ARE PACKED IN A WATERPROOF CUSTOM FITTED BAG, WRAPPED IN 2 LAYERS OF BUBBLE WRAP AND THEN PLACED INTO A CUSTOM FITTED CARDBOARD MAILER. IF YOU DO WIN MULTIPLE ITEMS, PLEASE DO NOT PAY FOR THEM INDIVIDUALLY!

PLEASE WAIT FOR THE INVOICE! WE WILL TRY TO PUT UP NEW AUCTIONS EVERY DAY! The item "SIGNED FIRST EDITION 1979 THE FBI PYRAMID MARK FELT DEEP THROAT WATERGATE" is in sale since Tuesday, June 23, 2015. This item is in the category "Books\Antiquarian & Collectible". The seller is "mugwumpny" and is located in Long Island City, New York.