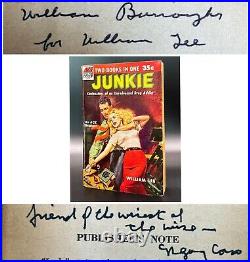 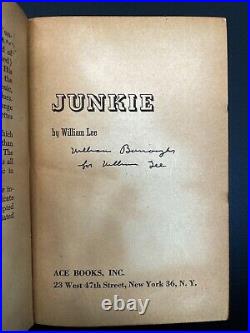 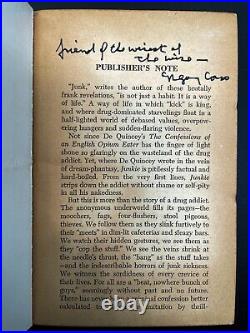 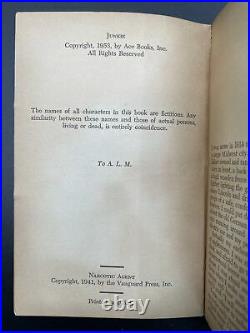 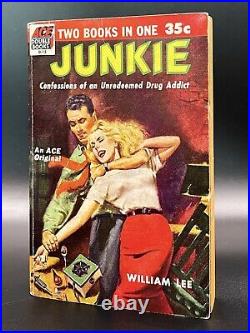 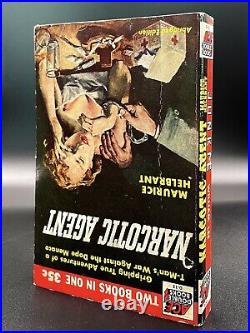 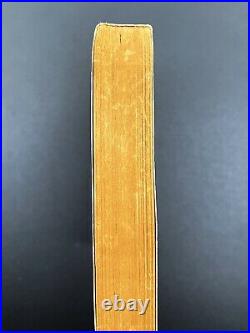 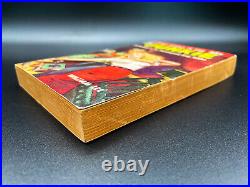 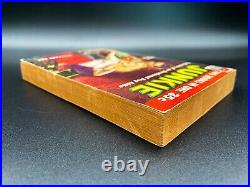 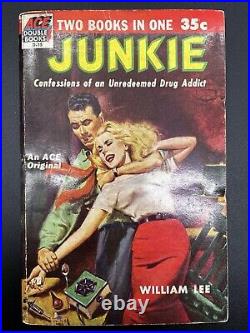 A gem among gems and a centerpiece of most any collection with the book SIGNED by the Author on behalf of his pen-name, "William Burroughs for William Lee, " and SIGNED and INSCRIBED by Gregory Corso Friend of the wisest of / the wise - / Gregory Corso. A spectacular and very special example. Junkie was initially considered unprintable until Allen Ginsberg championed the work leading to its publication as an Ace Double with Narcotic Agent by Maurice Helbrant.

Based on his own experience with drug addiction, Burroughs' first work was an allegory for the addictive nature of American capitalism. The friendship and collaboration between Burroughs and Corso as well known. William Burroughs met and befriended Gregory Corso after they were introduced by Allen Ginsberg, who also acquainted Corso with Jack Kerouac and many of New York's writers and artists. When Ginsberg, Peter Orlovsky and Burroughs were in Tangiers, Corso came and visited them, and then persuaded them to come live in Paris, and introduced them to a place later to be known as the Beat Hotel.

Here, Corso and Ginsberg helped Burroughs edit together The Naked Lunch, and the two poets produced some of the finest work. He was the youngster member of the'inner circle' of Beats - that small social group that is the only one that can be accurately and honestly considered the Beat Generation. Yet, despite being the youngster of the group, Corso was the first published Beat, having his collection of poetry, The Vestal Lady on Brattle, published in 1952. Junkie (later published as "Junky") offered a coldly clinical yet grimly witty view of an addict's life, neither apologizing for it nor whitewashing its ghastliness (American National Biography). Reprinted later with the title Junky - Burroughs' preferred spelling, later overruled by the original publisher - Junkie was Burroughs' first book, published under a pseudonym due to the controversial nature of the subject.

Though Junkie is a straight narrative, being autobiographical it lacks the kind of plot that readers might expect. Though billed as'the confessions of an unredeemed drug addict,' few people could have guessed that it actually was what it claimed to be. It is an adventure story-Lee versus the law-episodic like the cliff-hangers at the Saturday morning children's movie matinees.

For the most part the book sticks accurately to the real chronology and events of Burroughs's life. There are periodic expository passages in which Bill gives the reader factual information about drugs, federal and state laws. The book works as a how-to-do-it manual, an encyclopedic introduction to the junkie world for the uninitiated reader, including facts such as how to cure pot and prepare paregoric.

Even what to do should you find yourself on an airplane without a hypodermic syringe (Miles, 60-61). Published in the same volume with Maurice Helbrant's Narcotic Agent, printed upside-down and to the rear of Junkie, with the back cover serving as the front cover for Helbrant's work. Original paper wrappers present clean and unmarked with some mild shelf-wear. Light wear to edges but for a couple moderate dents to fore-edge. Light to moderate hinge-wear with single dent to mid-front.

Crease about three quarters vertically from bottom to rear wrapper with scuff causing partial loss near hinge. A few very light creases to bottom fore-edge corner of same. Corners present very well with only light rubbing. Text blocks clean and unmarked but for a few very light scrapes and a bit of tanning. Open tear top of Publisher's Note with about one-half inch by one-eighth inch loss and light to moderate impact of dents to front wrapper fore-edge. SIGNED and INSCRIBED by Gregory Corso on the Publisher's Note, Friend of the wisest of / the wise - / Gregory Corso. " SIGNED by William Burroughs, "for William Lee, on the title page.

First Impression Original Price of 35c well retained. A classic work considered by many to be amongst the best, including The Adventures of Augie March by Saul Bellow, All the King's Men by Robert Penn Warren, American Pastoral by Philip Roth, An American Tragedy by Theodore Dreiser, Animal Farm by George Orwell, Appointment in Samarra by John O'Hara, Are You There God? It's Me, Margaret by Judy Blume, The Assistant by Bernard Malamud, At Swim-Two-Birds by Flann O'Brien, Atonement by Ian McEwan, Beloved by Toni Morrison, The Berlin Stories by Christopher Isherwood, The Big Sleep by Raymond Chandler, The Blind Assassin by Margaret Atwood, Blood Meridian by Cormac McCarthy, Brideshead Revisited by Evelyn Waugh, The Bridge of San Luis Rey by Thornton Wilder, Call It Sleep by Henry Roth, Catch-22 by Joseph Heller, The Catcher in the Rye by J. Salinger, A Clockwork Orange by Anthony Burgess, The Confessions of Nat Turner by William Styron, The Corrections by Jonathan Franzen, The Crying of Lot 49 by Thomas Pynchon, A Dance to the Music of Time by Anthony Powell, The Day of the Locust by Nathanael West, Death Comes for the Archbishop by Willa Cather, A Death in the Family by James Agee, The Death of the Heart by Elizabeth Bowen, Deliverance by James Dickey, Dog Soldiers by Robert Stone, Falconer by John Cheever, The French Lieutenant's Woman by John Fowles, The Golden Notebook by Doris Lessing, Go Tell It on the Mountain by James Baldwin, Gone with the Wind by Margaret Mitchell, The Grapes of Wrath by John Steinbeck, Gravity's Rainbow by Thomas Pynchon, and The Great Gatsby by F. Others include titles such as, A Handful of Dust by Evelyn Waugh, The Heart Is a Lonely Hunter by Carson McCullers, The Heart of the Matter by Graham Greene, Herzog by Saul Bellow, Housekeeping by Marilynne Robinson, A House for Mr.

Naipaul, I, Claudius by Robert Graves, Infinite Jest by David Foster Wallace, Invisible Man by Ralph Ellison, Light in August by William Faulkner, The Lion, The Witch and the Wardrobe by C. Lewis, Lolita by Vladimir Nabokov, Lord of the Flies by William Golding, The Lord of the Rings by J. Dalloway by Virginia Woolf, Naked Lunch by William Burroughs, Native Son by Richard Wright, Neuromancer by William Gibson, Never Let Me Go by Kazuo Ishiguro, Nineteen Eighty-Four (1984) by George Orwell, On the Road by Jack Kerouac, and One Flew Over the Cuckoo's Nest by Ken Kesey. Even further, those recognize as the best of the best include The Painted Bird by Jerzy Kosinski, Pale Fire by Vladimir Nabokov, A Passage to India by E. Forster, Play It as It Lays by Joan Didion, Portnoy's Complaint by Philip Roth, Possession by A.

Byatt, The Power and the Glory by Graham Green, The Prime of Miss Jean Brodie by Muriel Spark, Rabbit, Run by John Updike, Ragtime by E. Doctorow, The Recognitions by William Gaddis, Red Harvest by Dashiell Hammett, Revolutionary Road by Richard Yates, The Sheltering Sky by Paul Bowles, Slaughterhouse-Five by Kurt Vonnegut, Snow Crash by Neal Stephenson, The Sot-Weed Factor by John Barth, The Sound and the Fury by William Faulkner, The Sportswriter by Richard Ford, The Spy Who Came in from the Cold by John le Carré, The Sun Also Rises, For Whom the Bell Tolls and Old Man and the Sea by Ernest Hemingway, Their Eyes Were Watching God by Zora Neale Hurston, Things Fall Apart by Chinua Achebe, To Kill a Mockingbird by Harper Lee, To the Lighthouse by Virginia Woolf, Tropic of Cancer by Henry Miller, Ubik by Philip K. Dick, Under the Net by Iris Murdoch, Under the Volcano by Malcolm Lowry, Watchmen by Alan Moore and Dave Gibbons, White Noise by Don DeLillo, White Teeth by Zadie Smith, and Wide Sargasso Sea by Jean Rhys. This item is in the category "Books & Magazines\Antiquarian & Collectible". The seller is "twobeesrarebooks" and is located in this country: US.