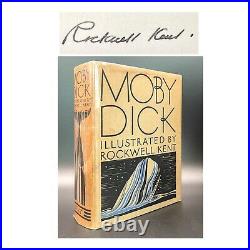 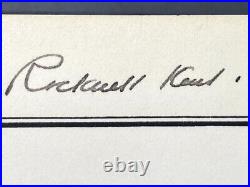 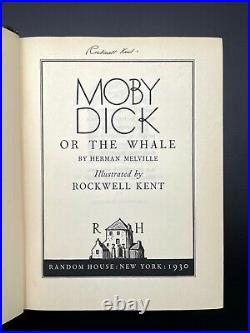 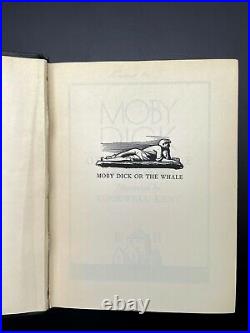 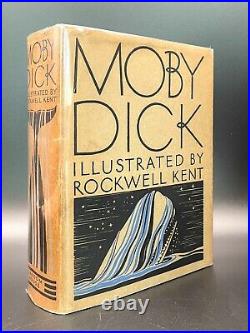 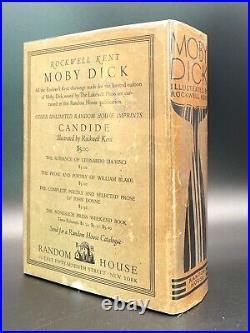 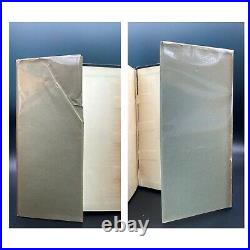 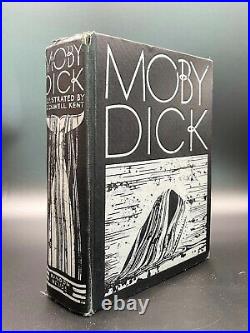 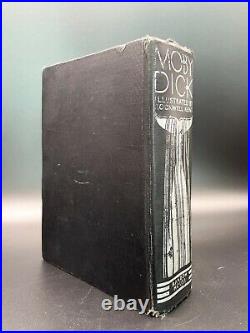 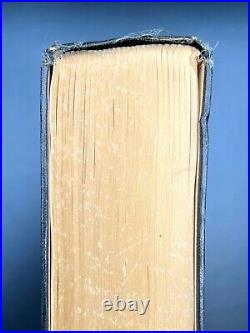 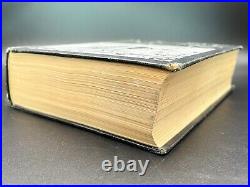 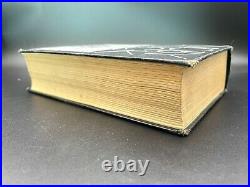 Octavo, full bound black cloth boards with silver gilt title and illustration to front panel and spine. First Edition (thus), First Printing of Herman Melville's classic tale beautifully illustrated by Rockwell Kent and presenting in its exceptionally rare and notoriously fragile Original Dust Jacket. One of the most famous illustrated books of the 20th century and a towering example of Kent's art. A very nice autographed example with excellent shelf appeal. Initially spurned by critics and readers when published in 1851, in the 20th century Moby Dick would be rediscovered and acknowledged as possibly the greatest of all American novels (Chronology of American Literature).

Kent did more than provide the illustrations for this landmark editionhe designed the entire book. His energy, many-sided activities and preoccupation with integrated book design made him one of the best known American illustrators of his time (Harthan, 247).

Includes 272 of the 280 illustrations in the three-volume, Lakeside Press limited edition that preceded it the same year. Vanity Fair quipped, Of 1930 the literary event, Was the Random House edition of Moby Kent! Binding partially loose with a light slant from separation to gutter of title page and verso of opposite as well as gutter of rear endpaper and pastedown. Original full-bound cloth boards present well with mostly retained crisp illustration to front and title to spine.

Moderate rubbing to corners and head and foot of spine with some loss and fraying as well as a few very small partially open tears. Moderate wear to hinges with less to fore-edge. Small bump to top rear board. Faint stains to bottom and fore-edge text-blocks with no internal impact.

Internally clean and unmarked but for small, inoffensive nameplate affixed to front endpaper. Signed on the title page by the illustrator, Rockwell Kent. Dust Jacket presents exceptionally well. Panels present about clean and unmarked with just a few very faint stains as well as some shelf-wear to rear. About three-inch closed vertical tear from front top edge near hinge downward extending about one-quarter inch to spine.

Rear edges present with a bit more wear and an open tear with some adjacent loss at bottom. Hinges and creases show moderate wear. Toning to spine with light chipping to head and foot. Same to corners with very little loss. Flaps clean with crease to front.

A rare and special autographed example. A classic work considered by many to be amongst the best, including The Adventures of Augie March by Saul Bellow, All the Kings Men by Robert Penn Warren, American Pastoral by Philip Roth, An American Tragedy by Theodore Dreiser, Animal Farm by George Orwell, Appointment in Samarra by John O'Hara, Are You There God? It's Me, Margaret by Judy Blume, The Assistant by Bernard Malamud, At Swim-Two-Birds by Flann O'Brien, Atonement by Ian McEwan, Beloved by Toni Morrison, The Berlin Stories by Christopher Isherwood, The Big Sleep by Raymond Chandler, The Blind Assassin by Margaret Atwood, Blood Meridian by Cormac McCarthy, Brideshead Revisited by Evelyn Waugh, The Bridge of San Luis Rey by Thornton Wilder, Call It Sleep by Henry Roth, Catch-22 by Joseph Heller, The Catcher in the Rye by J. Salinger, A Clockwork Orange by Anthony Burgess, The Confessions of Nat Turner by William Styron, The Corrections by Jonathan Franzen, The Crying of Lot 49 by Thomas Pynchon, A Dance to the Music of Time by Anthony Powell, The Day of the Locust by Nathanael West, Death Comes for the Archbishop by Willa Cather, A Death in the Family by James Agee, The Death of the Heart by Elizabeth Bowen, Deliverance by James Dickey, Dog Soldiers by Robert Stone, Falconer by John Cheever, The French Lieutenant's Woman by John Fowles, The Golden Notebook by Doris Lessing, Go Tell It on the Mountain by James Baldwin, Gone with the Wind by Margaret Mitchell, The Grapes of Wrath by John Steinbeck, Gravity's Rainbow by Thomas Pynchon, and The Great Gatsby by F. Others include titles such as, A Handful of Dust by Evelyn Waugh, The Heart Is a Lonely Hunter by Carson McCullers, The Heart of the Matter by Graham Greene, Herzog by Saul Bellow, Housekeeping by Marilynne Robinson, A House for Mr. Naipaul, I, Claudius by Robert Graves, Infinite Jest by David Foster Wallace, Invisible Man by Ralph Ellison, Light in August by William Faulkner, The Lion, The Witch and the Wardrobe by C. Lewis, Lolita by Vladimir Nabokov, Lord of the Flies by William Golding, The Lord of the Rings by J. Dalloway by Virginia Woolf, Naked Lunch by William Burroughs, Native Son by Richard Wright, Neuromancer by William Gibson, Never Let Me Go by Kazuo Ishiguro, Nineteen Eighty-Four (1984) by George Orwell, On the Road by Jack Kerouac, and One Flew Over the Cuckoo's Nest by Ken Kesey. Even further, those recognize as the best of the best include The Painted Bird by Jerzy Kosinski, Pale Fire by Vladimir Nabokov, A Passage to India by E. Forster, Play It as It Lays by Joan Didion, Portnoy's Complaint by Philip Roth, Possession by A.

Byatt, The Power and the Glory by Graham Green, The Prime of Miss Jean Brodie by Muriel Spark, Rabbit, Run by John Updike, Ragtime by E. Doctorow, The Recognitions by William Gaddis, Red Harvest by Dashiell Hammett, Revolutionary Road by Richard Yates, The Sheltering Sky by Paul Bowles, Slaughterhouse-Five by Kurt Vonnegut, Snow Crash by Neal Stephenson, The Sot-Weed Factor by John Barth, The Sound and the Fury by William Faulkner, The Sportswriter by Richard Ford, The Spy Who Came in from the Cold by John le Carré, The Sun Also Rises, For Whom the Bell Tolls and Old Man and the Sea by Ernest Hemingway, Their Eyes Were Watching God by Zora Neale Hurston, Things Fall Apart by Chinua Achebe, To Kill a Mockingbird by Harper Lee, To the Lighthouse by Virginia Woolf, Tropic of Cancer by Henry Miller, Ubik by Philip K. Dick, Under the Net by Iris Murdoch, Under the Volcano by Malcolm Lowry, Watchmen by Alan Moore and Dave Gibbons, White Noise by Don DeLillo, White Teeth by Zadie Smith, and Wide Sargasso Sea by Jean Rhys.

The item "SIGNED Moby Dick FIRST EDITION + DJ Herman MELVILLE / Rockwell KENT 1930" is in sale since Saturday, September 11, 2021. This item is in the category "Books & Magazines\Antiquarian & Collectible". The seller is "labb1279" and is located in Baton Rouge, Louisiana.