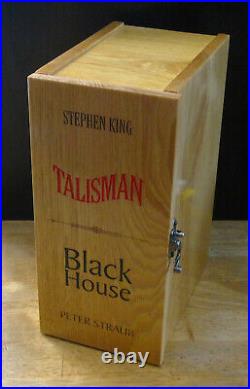 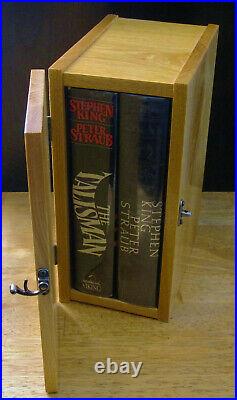 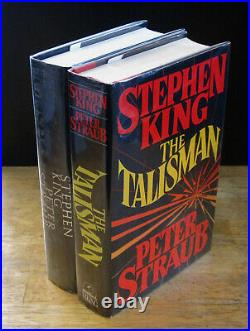 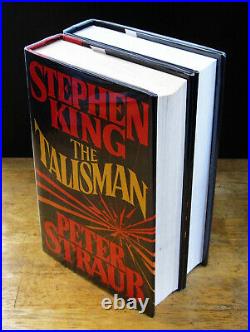 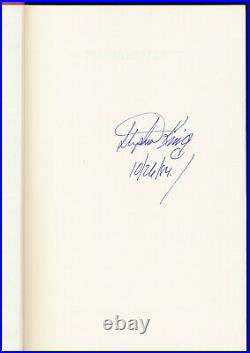 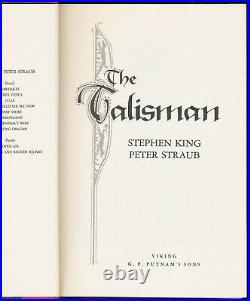 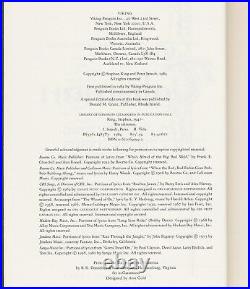 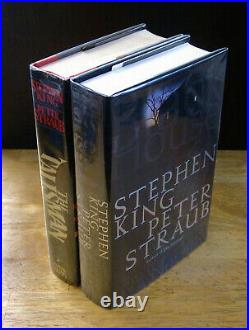 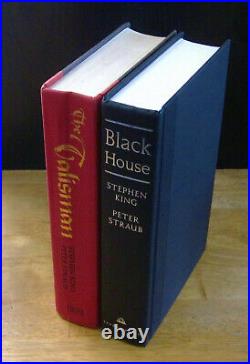 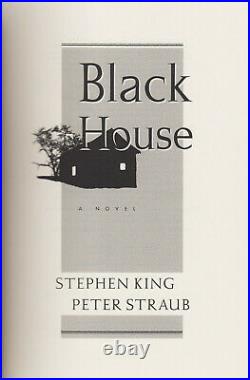 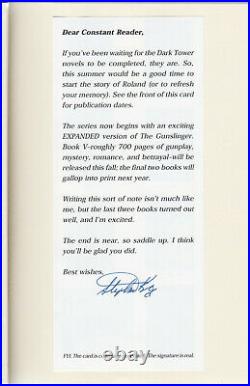 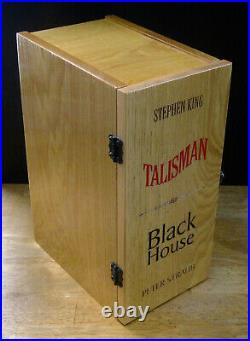 Presented and preserved in a custom Dolso finished box weighing in at over five lbs. Beautifully designed hardwood case complete with brass hinges and stylish latch; case lid mirrors the original title designs of each novel neatly etched in black and red. Interior lined in black felt. The Talisman is signed by Stephen King at front endpaper: Stephen King, 10/26/84. Rare early signature contemporaneous with the release of this title.

Eerily sparse jacket design with silver and black titles and various shades of black, shoe print and silhouettes of the "black house". Fine rarity in same wrapper. "The Talisman" is the first collaboration in 1984 between horror/fantasy writers King and Straub.

Here, they mix their talents to create an unforgettable epic of fantasy, adventure, and resounding intrigue. In the Talisman, 12-year-old Jack Sawyer takes on a quest in this and a parallel world, the "Territories, " to acquire a mystical talisman that will save the life of his dying mother and her "twinner, " the Queen of the Territories.

Jack "flips" back and forth between worlds during his journey. In the long-awaited 2001 sequel, "Black House, " King and Straub return to the now retired homicide detective.

Jack Sawyer, the 12-year-old hero of "The Talisman", is now 35 and has stepped away from being the LAPD's whiz-kid homicide sleuth. Some twenty years on, Sawyer is drawn back in to the parallel universe of The Territories.

Here, he must dig for the soul strength to enter a terrifying house at the end of a deserted track of forest and face the obscene and ferocious devils sheltered within it. On display are two master word crafters, both at the top of their game. Each volume printed in the United States of America on acid-free paper. 8vo - over 7¾ - 9¾ Tall. 646 pages and 625 pages. The item "THE TALISMAN & BLACK HOUSE, STEPHEN KING SIGNED, 1ST EDITIONS IN DOLSO BOX" is in sale since Friday, November 20, 2020. This item is in the category "Books & Magazines\Antiquarian & Collectible". The seller is "mediumisthemessagemedia" and is located in Rapid River, Michigan. This item can be shipped to United States, all countries in Europe, Canada, Japan, Australia.